The fastest way to get real followers on Poshmark [2023 Guide]

Sharing and following your way to a massive audience on Poshmark.

This probably isn’t the first blog post you’ve read about getting more followers on Poshmark.

You’re jumping around results on Google, looking for something that’s going to really turn your Poshmark closet into a side-business.

I’m not here to waste your time. I’m here to show you how to get explosive results. Incredibly fast.

I don’t share these secrets with everyone. But the people who take it and run with it see crazy numbers. Like, 6000 new followers in a week:

How to get more followers on Poshmark

In short, the best ways to get more followers on Poshmark are:

Below, I’ll explain exactly how to do each of these actions so you can grow your following on Poshmark.

Sharing is the key

I’m sure all of the other blogs told you that too.

Here’s what they didn’t tell you - you have to share other people’s items. A lot.

Sharing your own items is great, and it’s a good way to make sales (which is ultimately what you want). But, if you want followers, you have to help other people out.

People aren’t just going to magically show up at your closet and follow you. Well, at least not real people. You might get some fake profiles or spammers.

In order to get someone’s attention, you have to do something for them. Sharing someone’s items is the best way to get their attention.

If the person is an average, typical posher, they’ll have their notifications enabled. That means, if you share their item(s), they get a notification on their phone.

But, is that person ready to follow you? I’m not sure. They might be doing something else at the time. Sleeping, eating, binge-watching Netflix.

You want to get their attention at the right time, when they are ready to pay attention to you.

That time, is during a party.

Here’s the best way to get new followers 👇

Share other people’s items from the party feed, while the party is going on.

Here’s what happens - not only will people follow you back, but they’ll go to your closet and share your items as well.

So, not only do you get more followers, but your items are being exposed to a larger audience. You have a better chance of making sales.

How much should you share? Well, it depends on how many followers you want. If you want a few followers, share a few items.

All you need to do is share the items in the feed, and then refresh the page to get new items. Over and over again. It’s a lot of work.

It’s an app that helps you save time while you get more followers and make more sales on Poshmark.

Okay. Now that we’ve covered the best way to get more followers on Poshmark, I’ll show you some more ways to increase your results.

Following is the second best way to get more followers on Poshmark.

The reason I recommend it, is because there’s a limit to the number of items you can share in a day (somewhere around 10000).

So, once you’re done sharing other people’s items, you can switch over to following people and get another 10000 chances or so to get some people’s attention.

I wouldn’t just follow anyone - there’s a little bit of strategy to this.

I would go to a large closet that’s similar to the brands and style that you’re trying to sell in your own closet.

I would go to their “Followers” list. Then, I would go down one by one and follow everyone (until you run out of time or your thumbs get sore).

People follow other people on Poshmark for two reasons.

If you’re trying to grow your following on Poshmark, you can expect roughly a quarter to a third of people you follow to follow you back.

Like sharing, listing, and other functions on Poshmark, Poshmark has a follow limit. The limit for following other users on Poshmark is roughly 10,000 per day. Once you hit the limit, you will be blocked from following closets for some amount of time (usually anywhere from a couple of hours to 12 hours).

Poshmark is a platform of resellers supporting other resellers. People go out of their way to help others, and they get helped in return.

Another great way to gain new followers is by returning shares.

To return shares, you’d need to go into the user’s closet and share a few items manually.

Or, you can use Closet Tools’s full automation - which can automatically return shares a few seconds after someone share’s your items. Full Automation can do other things too, like automatically offer to new likers in seconds, automatically follow users back, etc. 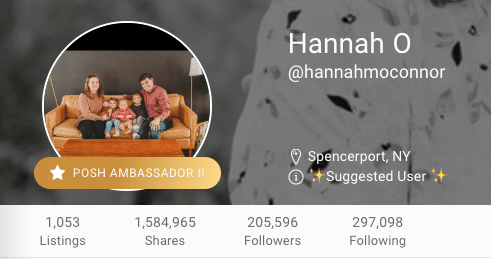 The main advantage of becoming a Posh Ambassador (it used to be “Suggested User”), is because Poshmark will literally throw followers at you.

Not only will they throw followers at you, they’ll throw targeted followers your way.

Think about when you signed up for Poshmark. You told them what brands you’re interested in, and the sizes and styles you liked.

Then, magically, you’re following over 1000 people and your feed is filled with items you would want to buy.

It’s not a secret that Poshmark wants new users to buy items. And it would be a shame for you to miss out on the opportunity to be one of the 1000 people new users get to follow.

One of the benefits of the Posh Ambassador program is randomly being selected to get hundreds of followers (new users on the platform).

This can happen every few days, and is one of the quickest ways to get more followers.

You can check out Poshmark’s official documentation on the topic, or read below to see what it takes to become a Posh Ambassador 👇

Posh Ambassadors are expected to:

To qualify, you must meet all of the criteria below:

That’s a lot of work. Poshmark isn’t going to give those followers to just anyone. You’ve gotta be committed to the platform.

Poshmark automatically follows closets for users so that when they’re just starting out in the app they have a feed filled with relevant items based on their interests and size. They don’t just follow any closets, they’re following Poshmark ambassadors.

It’s useful for Poshmark to automatically follow closets for users because otherwise new users would be greeted by an empty feed and not be enticed to browse through items to shop. Following Poshmark ambassadors helps give new users the best experience in the app, increasing the chance of a good experience buying an item, and increasing the chance they’ll come back again to shop.

It’s also useful, because if you’re a Poshmark ambassador, you’ll automatically get new followers almost every day. This helps grow your audience, and it also helps increase your sales because the number of people seeing your items increases.

How many followers do you need on Poshmark to make money

But, after reviewing many closets, it’s safe to say that having over 30,000 followers on Poshmark will start to give you some traction. 30,000 might seem like a lot, but once you become a Poshmark ambassador you are given followers quite often.

So, do followers matter on Poshmark?

Followers matter because some amount of sales do come from people browsing in the main feed. This is where they will see new items listed from the closets they follow. But, the majority of sales are driven through search and feed discovery. Increasing your following won’t hurt your ability to sell on Poshmark, but it’s not the main way sales are generated on Poshmark.

That’s really it. Just about anything else you do on Poshmark doesn’t help you get new followers.

In short, to get followers you need to do something for them and get their attention. Sharing their items, and following them are just about the only way to do that.

Sharing other people’s items during a party is the ultimate time to get the most followers.

Also, Poshmark will literally throw followers at you if you’re a Posh Ambassador.

I hope this article has helped you! There’s some other stuff I want to show you.

Check out this blog post covering 24 tips to make more sales on Poshmark.

Or this one, which covers whether or not the Closet Tools is ethical to use.

Closet Tools is a mission to help Poshmark sellers increase sales, followers, and turn their Poshmark closet into a full-time business. Our blog covers the best tips and tricks you can use to make the closet of your dreams.

Are You Ready To Make Sales?