Everything you need to know about Poshmark Share Jail

You’ve gone and done it.

You shared too much, and now Poshmark isn’t letting you share your items.

Don’t worry, your account isn’t banned. Your closet isn’t shut down. You’re going to be okay.

You would know if that happened. Poshmark would send you and email, and you wouldn’t be able to log into your account.

If you’re interested in learning about it, keep reading!

Poshmark share jail is a way for Poshmark to keep bad-actors off the platform. In this case, it restricts people who are sharing much more than what is considered reasonable in a single day.

It’s actually a good thing. If Poshmark didn’t protect itself from spammers, the platform would be ridden with bots and wouldn’t be the healthy ecosystem it is today.

There’s a daily limit for shares on Poshmark, and it’s roughly 10000 shares in a 24 hour period.

If you get close to that, or exceed it, you run the risk of getting locked up in Poshmark share jail.

There are other “jails” on Poshmark too, such as “Poshmark follow jail”, which happens when you follow too many accounts in a single day.

The limit for follows is also the same. Roughly 10000 follows in a day.

Some closets are using Poshmark Bots to share their items because it saves them time and makes them more sales.

Now that you know what Poshmark share jail is - now let’s see if you’re in it.

How to know if you’re in Poshmark Share Jail

It’s pretty simple to find out.

If the gray “Shared Successfully” banner doesn’t pop up, you’re in share jail.

If the gray “Shared Successfully” banner pops up, then you’re not in share jail. Yay! 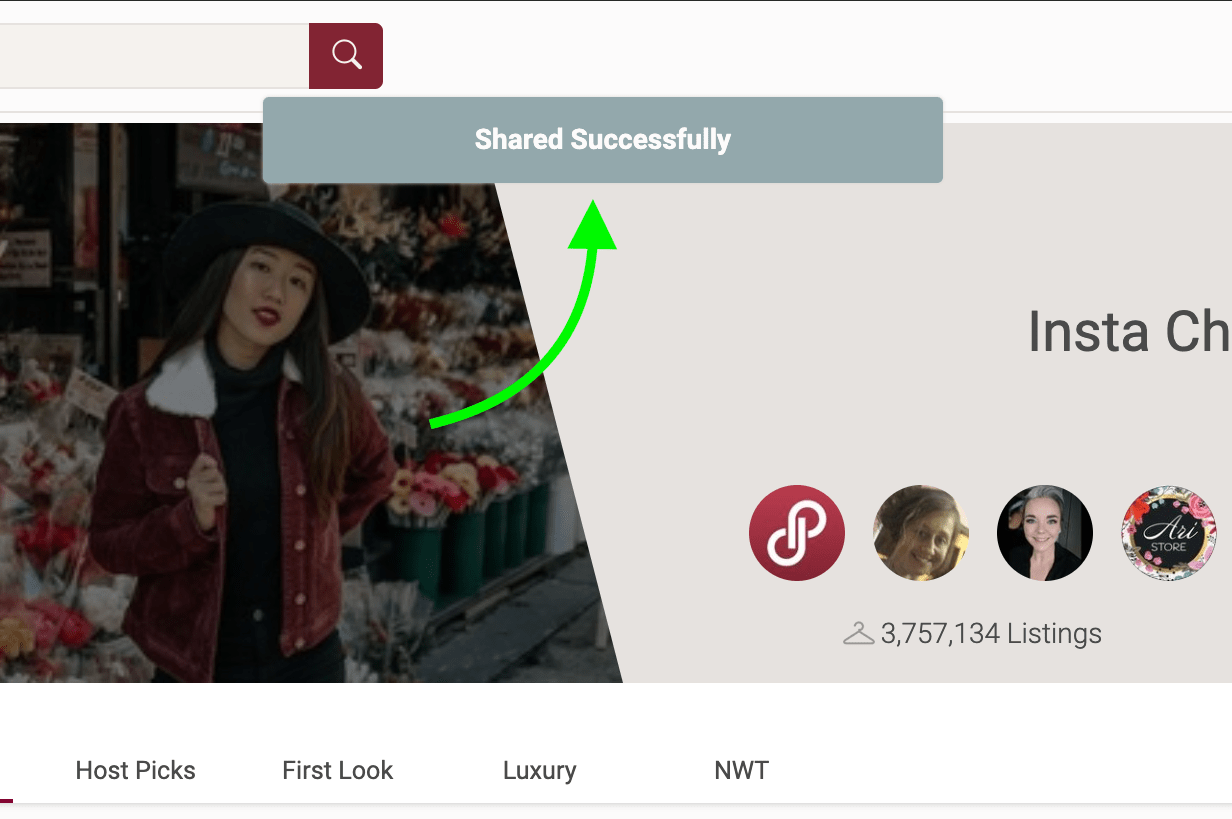 It should appear at the top of the page every time you share an item.

Next, I’ll tell you the super complicated way to get out of it.

All you have to do to get out of Poshmark share jail is to stop sharing your items for 24 hours.

Just take a day off and enjoy yourself. You can get back to sharing tomorrow.

If you’re an advanced posher, and you’ve been locked up in Poshmark share jail before, I have some secrets from you.

Some of them I’ve been told by high-sales sellers (upwards of $50k per month).

How to avoid Poshmark Share Jail and still make sales

Obviously, sharing is key to making sales on Poshmark.

That’s the core operation of the platform. It’s designed that way to keep users engaged and both buying and selling on the platform.

You want to share a lot, but not too much.

If you find yourself in share jail too often, there can be some long-term consequences.

For instance, I pumped out 5386 shares in a single party once.

When I did that, my closet’s bio link disappeared, and I wasn’t able to follow anyone anymore.

Clearly, it was more than just share jail. It was solitary confinement.

Jokes aside, you don’t want to end up there. You want to stay on Poshmark’s good side, so you can continue to make sales and make money on the platform.

The first thing I’ve been told, is that you don’t want Google CAPTCHAs popping up while you’re sharing.

That’s a clear signal to Poshmark that you’re doing something that’s not normal. Thumbs don’t move that fast.

If you’re sharing too fast, Poshmark’s algorithm will proactively give your shares less attention than they would normally get.

One way to know if this has happened to you, is you’ll start to see less engagement on your items (less likes and comments).

I’m not 100% sure if this action is permanent, or if you can gain attention back over time by behaving well.

I’m assuming (based on other social platforms) if you fly under the radar long enough things will go back to normal.

To keep Google CAPTCHAs out of your sharing, you’ll need to slow down with your sharing. More like a normal human being would.

I would recommend not doing any more than 4000 shares in a day. That should keep you in good standing with Poshmark, and give your items the attention they deserve.

Staying out of share jail while using a bot

If you’re using a Poshmark bot to share your items, you have the power to pump out a lot of shares in a short amount of time.

Obviously, you’ll want to tone it down a bit so you don’t risk getting your closet shut down.

As I recommended above, I would keep your shares under 4000 in a single 24 hour period.

If the Poshmark share bot you’re using is a good one, it should have a share limit so you can specify that you don’t want to go over 4000 shares in a day.

If 4000 shares in a day sounds like a lot to you, that’s nothing for a tool like the Closet Tools. It can do thousands of shares, and follow thousands of people, all by clicking one button.

It saves you a ton of time and helps you make more sales on Poshmark.

Poshmark share jail is a good thing for the platform. It keeps spammers away, and levels the playing field.

You can get into Poshmark share jail by sharing close to (or more than) 10000 shares in a single day.

To get out of share jail, you need to stop sharing for 24 hours.

If you want to avoid share jail and avoid CAPTCHAs, keep your shares under 4000 in a single day.

Thanks for reading! I hope you got something out of it.

If you did, share it with your fellow poshers!

Closet Tools is a mission to help Poshmark sellers increase sales, followers, and turn their Poshmark closet into a full-time business. Our blog covers the best tips and tricks you can use to make the closet of your dreams.

Are You Ready To Make Sales?